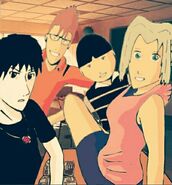 Alna, Kiko, Clutch and Steiner
Add a photo to this gallery

RED is a web-comic series written and illustrated by Munachi Umezulike. It tells the story of Crow Eswald, a mysterious vampire who appears at Midtown high school and is acquainted with a young teenager called Yuki. He then discovers that is a Red, one of a few who posses the power to protect the world from the evil vampires.

The series launched on the 18 March 2016, after almost two years of preparation. RED is hosted by Comic fury is every chapter is released once every week Saturday (7 Pages a Week). RED is currently available in only English Language.

A Mysterious vampire named Crow Eswald, appears at Mid-town high school and is acquainted with a young teenager called Yuki. He Saves her from the Gozu, a group of high school hooligans who extort money from innocent students at the school. after that, Crow doesn't hesitate to reveal his true identity to Yuki, leaving her in utter confusion about the existence of vampires.

A Crow Eswald is a two hundred and fifty six year old Lycannite Vampire (256). These are vampires that are created when the lunar energy is at it's greatest peak. Lycannites are sometimes referred to as lunar fangs.

Crow Eswald was found in the wilderness of Eswald by Elvis and Alna and became a close unit after that. They later joined the Vampires of area 96 and soon enough became council members. Crow was eventually corrupted by the Vikor using the Gmoviti Gnacci and was swayed into commiting heinous crimes for Viktor. He later became wanted by the Vampire Council of area 96, which he then fled to Midtown.

Crow being a Lunar fang is stronger and faster than the average Vampire his age. When he has absorbed enough energy from the moon, his eyes luminates and all his abilities are doubled further. Crows other proficient abilities include Glancing, Speed and immense strength. Quotes " I'm here to remove sadness from this World".

Yuki is a seventeen year old (16) high school girl who lives in midtown. She is know for her short white hair. Yuki grew up alone giving her parents are high ranking military officials who are never at home. This child hood caused her to be a loner as she doesn't have any significant friends.

Yuki is a funny and wild character, she does sometimes without clearly thinking about them. She also tends to give people the benefit of the doubt especially when she sees good in that particular person.

Quotes " Humans do bad stuff too, that doesn't make us all evil". .

Midori is a fifteen year old student (15) who attends Midtown High school. Midori is a disturbed child, especially after watching his father and mother get turned apart by an "unidentified creature". However, Midori tends to be very capable of covering up his traumatic childhood experience.

Midori is a straight A student and is proficient in planning ahead. Midori, however is not afraid of things he doesn't understand like vampires but quickly embraces it as a part of his reality.

Quotes "This is all on fate, this is what it has in stored for me, so I'm going to embrace it".

Kouji is a sixteen year old student (16) who attends Midtown High school. He is best friends with Midori.

Kouji and his grandmother arrived at Midtown much later than Yuki and Midori. He later became best friends with Midori because he wanted to fill the void after the death of Midori's parents. Kouji is a light hearted person and loves clowning around. He hates dull moments and always tries to lighten the mood around him. Kouji intellectuality is far contrary to Midori's but he never feels bad about it. Kouji future goals or present motivations are unknown apart from his crush on Yuki.

Elvis is a seven hundred year old Vampire (700; Strigoi). He was once know as the Viking- rebel and is well revered by vampires around the World.

Elvis belonged to the Viking vampires during the Vampire Viking era but later had a fall out and went his separate way. Shortly after that, he created Alna and became her family. They both found Crow who later became a part of them. The three of them later joined the Vampire Council of area 96. Although Elvis's immense talents as a vampire, he is a renowned pacifist and hardly resorts to physical violence but tends to use wisdom powered words to calm disputes. Elvis fondly preaches about "family" and "protecting the people you love". He may be a subtle in his ways but won't hold back against anyone who hurts his family.

Quotes "..We protect ourselves by being each other's light, we are our weaknesses but yet our strengths".

Alna is a three hundred and ten year old Vampire (310; Strigoi). She has spent her entire life besides Elvis and both he and Crow are the most important people to her.

Alna was a prisoner and survivor of the 2nd Viking War which ended the Viking Era. She was made by Elvis and they both spent their this lives together until the found Crow Eswald. The three of them later joined the Vampire Council of area 96. Alna is know generally for her quick temper. However, most of her out burst are not premeditated and have little effects afterwards. Alna would get angry at you for getting angry at her. Apart from her hot bloodedness, she is really frail at heart, especially for her family; Elvis and Alna. She tends to aggressively deal with anything that might compromise the relationship between the three of them even if that includes one of them.

RED is flagged S! V! L!. The series contain themes or scenes that may not be suitable for very young readers thus is rated PG.

Although vampire are beings from folklore who subsists by feeding on the life essence of the living. Munachi attempts to depict Vampires in RED as beings with Dark Energy (Energy of Death) instead as blood sucking creatures.

Retrieved from "https://comicfury.fandom.com/wiki/RED?oldid=1319"
Community content is available under CC-BY-SA unless otherwise noted.